PLEASE JOIN OUR  FREE ZOOM MEETING ON FEB. 25 AT 7 PM FOR TIPS ON COMPLETING THE SAN ANTONIO CHAPTER OF THE LINKS, INC. 2021 SCHOLARSHIP APPLICATION.

He helps students graduate debt-free, as founder of the Scholarship Leadership Institute (SLI). Learn more about this talented speaker at www.majorbetz.com. Although he lives in our community, he speaks to kids from Hawaii to Niagara Falls! The San Antonio Chapter of the Links, Inc. is excited to invite him to help prepare students to win scholarship money for college!

Major Betz says he became sick and tired of being sick and tired, while searching for scholarships for his daughter.  He helped her and his son both eventually earn full-ride scholarships! He found his calling and has since edutained a host of students to earn well over $60,000,000 in merit-based scholarships, plus millions more in other financial assistance. One student earned over $1.2M in merit-based scholarships and still earns overpayments like many of the students enrolled in his SLI programs! An 11-yr old child already earned over $60,000 by following his teachings!

SIMPLY SIGN-UP AT THIS LINK AND YOU WILL RECEIVE AN INVITATION AND A FREE BOOK FROM HIS AMAZON COLLECTION. DON’T MISS THIS OPPORTUNITY TO HAVE MAJOR BETZ ANSWER YOUR QUESTIONS ABOUT THE LINKS SCHOLARSHIP AND HOW YOU CAN GET ON THE PATH OF SUCCESS TO HELP YOUR STUDENT GRADUATE COLLEGE DEBT FREE! REGISTER FOR UPDATES TODAY HERE.

(Check your spam folder if you don’t get the confirmation email within 2-min of registering). PLEASE NOTE:  IF YOU PLAN TO APPLY FOR THE LINKS SCHOLARSHIP, YOU MUST ATTEND THIS SESSION!

The San Antonio (TX) Chapter of The Links Incorporated is inviting area high school students to apply for its 2021 scholarship competition. Chosen students will receive a $2,500 scholarship, and must meet certain criteria including enrolling in a college, university or other post-secondary educational institution.

Scholarship Applications must be postmarked by March 19, 2021.

Go here to fill out the application: SA_Links_Scholarship2021. To learn more about our scholarship program, click here.

Dr. Carol Anderson of “One Person, No Vote: How Voter Suppression is Destroying Our Democracy” was the headline speaker on Sept. 28 for a partnership between the San Antonio (TX) Chapter of The Links, Incorporated and Texas Public Radio to educate the San Antonio community about voter suppression.

David Martin Davies, host of “The Source” on Texas Public Radio started the two-hour event with a one-on-one radio interview with Dr. Anderson, who is a professor of African American Studies at Emory University. Listen to the radio interview here.

After the interview, Dr. Anderson joined a panel discussion to continue the conversation of voter oppression in America. The panelists included:

The San Antonio Links would like to thank its sponsors for helping to bring Dr. Anderson’s voice to the Alamo City. Our sponsors are H-E-B; CPS Energy; NuStar Energy, LP; University Health System; and Friends of The Links. The event is one of many initiatives that the chapter is doing to celebrate its 60 years of serving the San Antonio community. 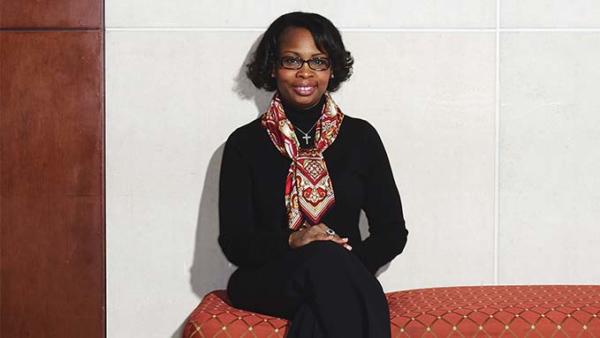 The Rust College Board of Trustees has announced the selection of former San Antonio Mayor, Ivy Ruth Taylor, as the 12th president of Rust College. She will be the first woman to lead Rust College as president.

The Trustees made their selection following an extensive eight-month search ending with a series of interviews with faculty, staff, students, alumni and representatives from the Holly Springs community.

“Dr. Taylor brings energy, intelligence, and competence as well as experience in listening to diverse views and building coalitions,” said Rev. Dr. David Swinton, chair of the Board of Trustees.

Taylor succeeds President David Beckley who has successfully led the school for 27 years. After a period of transition, Dr. Beckley will retire with the status of President Emeritus. Dr. Taylor spent six years as a lecturer in Public Administration at the University of Texas at San Antonio. She also worked at a nonprofit affordable housing agency and served multiple terms as a city councilmember prior to her term as mayor.

“We believe the abilities she gained in nonprofit management and political leadership will be readily transferable to an academic setting,” said Swinton.

While serving as mayor, Dr. Taylor joined the Board of Trustees for Huston-Tillotson University, in Austin, Texas. This sparked for her an additional interest in higher education, especially Historically Black Colleges and Universities (HBCUs). She is also on the board of the University of the Incarnate Word in San Antonio.

Dr. Taylor shared with the Rust College Board of Trustees that she is committed to changing lives, improving communities, and reducing economic inequality through working in higher education.

“I am honored and humbled to have this opportunity to serve the Rust College community. Through my conversations with the Board, students, faculty, staff and alumni, it was apparent that many appreciate the impact of Rust College on their lives and want to be part of envisioning its’ bright future. I am thrilled to be part of writing the next chapter for this historic institution”, said Taylor, who added, “My family and I are looking forward to becoming active members in this community.”

Dr. Taylor received her bachelor’s degree from Yale University and a master’s degree in City and Regional Planning from the University of North Carolina at Chapel Hill. She recently completed the Doctor of Education Program at the University of Pennsylvania. Her dissertation focused on leadership for Historically Black Colleges and Universities. She credits her academic success to the strong foundation, faith, and values instilled by her mother, a North Carolina native, who never had the chance to pursue her educational dreams.

She currently works as a consultant with J.L. Powers and Associates. She relishes time with her family — her husband of 20 years, Rodney, and their daughter, Morgan, a high school student. Rust College is a liberal arts college in Holly Springs, Mississippi, founded in 1866 and affiliated with the United Methodist Church.

The San Antonio (TX) Chapter of The Links Incorporated is inviting area high school students to apply for its 2020 scholarship competition. Chosen students will receive a $2,500 scholarship, and must meet certain criteria including enrolling in a college, university or other post-secondary educational institution.

Scholarship Applications must be postmarked by March 7, 2020.

Go here to fill out the application: SA Links Scholarship Application. To learn more about our scholarship program, click here.

The San Antonio Express-News recently featured The San Antonio Chapter of The Links’ literacy program at the East Side Boys & Girls Club. To read the story, go here. San Antonio Chapter of The Links, Incorporated Encouraging East Side Students to Read

San Antonio, TX– As kids go back to school, it’s no secret that the seventh largest city in the United States has one of the lowest literacy rates. San Antonio is ranked No. 76 out of 82 cities in terms of literacy. September is National Literacy Month and 25 percent of San Antonians cannot read, according to a Central Connecticut State University’s annual America’s Most Literate Cities study.

The San Antonio Chapter (TX) of The Links, Incorporatedis taking one step to help the community. Through a nine-month program with the East Side Boys & Girls Club, the organization of professional women committed to friendship and service will be working with middle school students to encourage them to read, “Vote! The Complicated Life of Claudia Cristina Cortez,” by Diana Gallagher. Along with this initiative, students will be rewarded for each book read and the most books read. Since 2015, the San Antonio Links Chapter has provided creative and engaging presentations for up to 50 students in grades 6-12 at the East Side Boys and Girls Club. 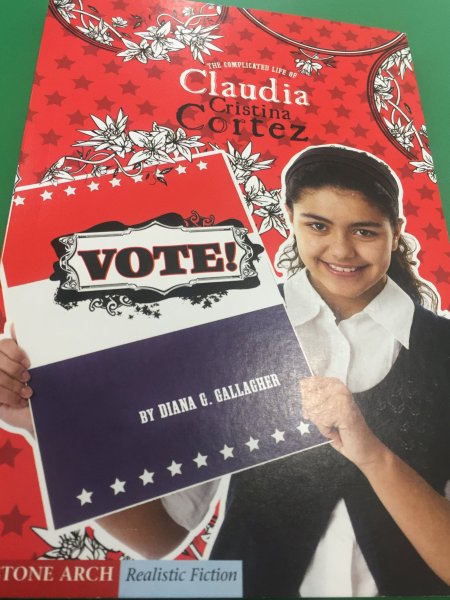 “This initiative alone won’t solve the problem of illiteracy in San Antonio, but it’s a positive step in the right direction with measurable impact, especially within the minority community,” said San Antonio Links President Paula Miles.

According to the Texas Education Agency, 68.5 percent of students met minimum standards for the third-grade reading STAAR test. SA2020, a nonprofit organization whose mission is to drive progress toward a vision for a thriving San Antonio, has a goal to increase that indicator to 85% of  third-grade students passing the reading portion by 2020.

In addition to the East Side Boys and Girls Club, the San Antonio Chapter of The Links will once again partner with The San Antonio Book Festival with the objective of helping to bring more African American authors to the city.

Last April, a significant donation from The Links helped to put “Well-Read Black Girl: Finding our Stories, Discovering Ourselves” by author Glory Edim into the hands of hundreds of female students at Wagner High School. The author also led a book and author symposium for these young ladies, exposing them to not only the book but the entire writing and publishing process. Experiences like these can open doors to new opportunities for young people and The Links Incorporated is excited about enabling similar literacy-focused experiences.

The San Antonio Chapter of The Links Incorporated will celebrate its 60th  anniversary of service and friendship throughout 2020 with a signature community event scheduled for September 2020. Through the chapter’s endowed scholarship fund at St. Philip’s College and scholarships awarded to graduating high school seniors, more than $100,000 has been awarded to area students over the years.

As we celebrate Black History Month, one organization in San Antonio has consistently given back to the San Antonio community in scholarships and philanthropy.

The San Antonio Chapter of The Links Inc. started in 1960, the same year four black college students staged the first sit-in at a Woolworth’s lunch counter in North Carolina. For the past 59 years, the Alamo City chapter has found it their mission to make a difference in the black community.